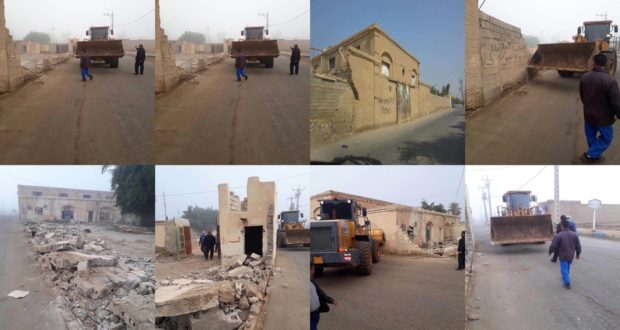 At the same time as the discovery of oil was made in 1908 in the Ahwazi Masjid Suleiman city, a summer and winter cinema was created in the Darkhuin city of Falahieyh, which has become the national monument by the oil company’s museum and memorial department in 2007.
This Darkhuin city’s cinema, which dates back to the age of 109 years ago and has been registered as a legacy of the people of Falahieyh (Shadegan) in contemporary history, but unfortunately, on Saturday, 27 January 2018, the Darkhuin Municipality with the loader, broke down this precious heritage and made it evenly grounded.
Earlier, the ruins of Sheikh Khazaal, the last Arab ruler whose government was overthrown by Reza Shah and exiled to Tehran in 1925, ruler’s palaces been destroyed in the cities of Mohammrah, Ahwaz capital and Hamidiyeh. Arab activists said: the purpose of the ruling system in Iran is to destroy the historical monuments of non-Persian people, especially the Arabs, to eliminate actual history and to change the historical facts of this earth, which is a kind of ethnic cleansing against non-Persian nations.
In addition to changing the population of the Arab cities, the Iran regime have banned the language and culture of the main inhabitants and the theft of their wealth, the regime has accelerated destroying of the non-Persian nations’ historical monuments in recent years.
The Revolutionary Guard also destroyed the Feiliyeh palace of Sheikh Khazaal, the last ruler of Al-Ahwaz (1878-1925) in Mohammrah (Khorramshahr) in November 2010, in which the Sheikh Abdul Hamid Palace, the son of Sheikh Khazaal, in Ahwaz City was destroyed too and turned into a car park. In September 2012, Sheikh Khazaal’s Hamidiyeh Palace destroyed too by Mechanical shovel.