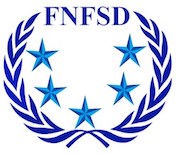 Message from the Front Nations for Self-
determination (Iran)
The Warsaw Summit was about the 40th anniversary of overthrowing the Pahlavi occupation regime and its positions on the Nations occupied by Iran.

To organizations and countries that maintain peace and security in the world;
For nearly a century, so-called Iran, as part of the political and geopolitical move in the region, considering the interests of its own country, Iran occupied the lands of non-Persian nations, without regard to national and human rights and the right their fate.

In order to continue the life and durability of this fake country, the idea of ​​a nationalist fascist based on Persianization and its false myths was set against all international rules and human rights treaties that were somehow guarantors of the rights of oppressed nations, including the right for self-determination was taken.

The non-Persian nations started their fight for their right to self-determination and national rights, in accordance with international law. Non-Persian nations, over the past decades, have raised various human rights and legal demands with their various uprisings, and tens of thousands of prisoners were persecuted and executed by the Iranian regime or still imprisoned in Iran.

The non-Persian nations such as and not limited to Kurds, Baloches, Turks, Ahwazi Arabs and other oppressed nations playing an active role in overthrowing the Iranian regime.

On the occasion of the 40th anniversary of the 1979 revolution we have gathered to stop and take down the Iranian regime.

Stand with the Front Nations for Self-determination (Iran) as the victory is near.