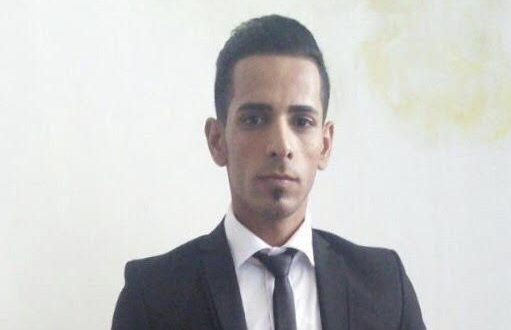 An Arab activist, Ali Zaheeri Sari, has been on hunger strike for five days in Sheyban Prison. According to Ahwazi Centre for Human Rights (ACHR) Ali Zaheeri Sari Ahwazi activist has been banned from contacting his family. One of the prisoners who came out of Sheyban prison few days ago says: “Ali is on hunger strike in protest of uncertainty and not being allowed to contact his family.

Ali Zaheeri Sari, born in May 1992, married, graduated from law, from the Koye Alawi (Althoura district), in Ahwaz capital. He is a Civil and cultural activist who had a lot of activities such as holding Arabic poetry nights and of support the chains’ campaign protests against the transfer of Karoon water and the destruction of the historical works of the Ahwaz region.

Ali Zaheeri Sari was arrested by the Iranian Minister of Intelligence along with other several Arab activists on 15th March 2017, after being held for 4 months, in the Iranian Intelligence Detention Centre in Ahwaz capital, accompanied by severe physical and mental torture that resulted in his nails was pull out, he was transferred to Sheyban prison.

Mr. Ali was sentenced at Branch 4 of the Iranian (Ahwaz) Revolutionary Court on charges of propaganda against the Islamic Republic, and the judge of the branch issued one Billion Iranian Rials (about $40,000) in order to bail him out, but the intelligence department has prevented him from release until the issuance of the verdict.

The Iranian Revolutionary Court in Ahwaz summoned prisoner Ali in September 2017 again from Sheyban Prison, in which “Ali Zaheeri Sari” faces new charges, such as contacts with organisations that are outside the country, actions against the security of the country and propaganda against the regime. According to his relatives, he has not been told at all in the initial hearings regarding the two charges have been added later.