Gastric bleeding of a Fifteen-year-old Ma’edeh Shabaninejad after 72 days of interrogation. She is an Ahwazi girl who is in the Iranian intelligence prison (Sepidar prison) for more than 72 days.

Iranian intelligence imprisoned Ma’edeh Shabaninejad for her activities in social media. She has been under physical and psychological torture. She is suffering from stomach pain and bleeding.

Ma’edeh, an Ahwazi student, has been imprisoned since 25th of January 2018 for her activities in the social media and writing poems in Arabic. She was born in 2003, she was doing her first year of high school, was one of the top students in Abadan city. 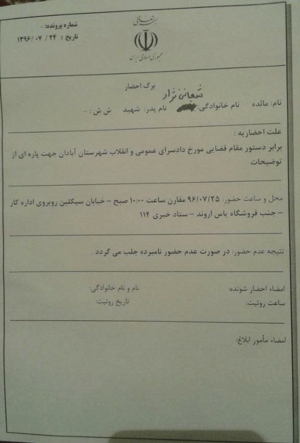 She was first arrested on Tuesday 17th of October 2017 by the Iranian intelligence (Ettela’at). They sieged, searched and took Ma’edeh from Shabaninejad’s house. Ma’edeh‘s father, (Shahid) a great poet and was a member of a cultural institute Alhiwar (Dialogue) which most of them were arrested and executed by the Iranian regime in 2008. Around that time, Shahid ran away to Iraq to seek asylum but was sentenced to five years of imprisonment after being subjected to physical and psychological torture on charges of illegally entering Iraq.

In late 2010 UN High Commissioner for Refugees in Iraq accepted Shahid as an asylum seeker, but in early 2011 Shahid was handed in to Iranian regime by the Iraq government. Iranian regime arrested him immediately.

In 2016 Someone billed Shahid. he got out of prison then ran away to a safe country. The pressure from the Iranian security forces on this family in Iran, the arrest of his daughter caused the return of Shahid to Iran.

The Revolutionary Court of Branch 2 of Abadan city issued a 200-million-toman (50,000 USD) bail for Ma’edeh. Her family bailed her out of prison, but that didn’t last long as the Iranian intelligence arrested her again on the 25th of January 2018.

Shahid said his daughter had told her mother that she had been accused of inciting violence through her poetry about Iran’s Arab minority. Bear in mind that Ma’edeh’s aunt was detained the same night and some cousins were arrested the following day. “Resist, my homeland, there is not much left of you,” one of her verses said. “Soon you will hear in your sky the sound of smiles and liberation’s call.”

Ahwazi Arabs facing discrimination on a daily basis whereby hundreds of people have been arrested around Ahwaz in the last few weeks alone.

“I am amazed the Iranian government is afraid of a 15-year-old girl,” Shabaninejad said by telephone. “A young girl is in constant fear in prison and cannot sleep at night.”

After two days of hunger strike, Ma’edeh was transferred to Sepidar Prison Clinic.